While most people only wonder whether there´s life beyond planet Earth, others are convinced the pyramids in Egypt were built by order of an extraterrestrial power. I think Grand Architect Imhotep would’ve had something very wise to say about that. Some even suggest the ancient temples in Mexico and Peru were not built by human hands – as if alien space pioneers made their mark on Earth as part of an interstellar highway, using the temples as Aliens-This-Way road signs. ‘Those stupid human beings will worship anything; give them a picture of your neighbour and they’ll sacrifice their best sheep for a little rain.’

The Temple Mount in Jerusalem is said to have been built to function as a landing platform for the alien invasion – but you’d have to be a pretty strong believer to find that one credible. 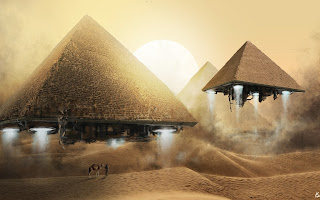 Chances are I’ve watched the History Channel one time too many. My idea of a History Channel is a whole lot different from what is actually being shown on TV. The dream of one A. H. living in B. of a Thousand-Year Reich seems to have become reality through the constants reruns of documentaries on the topic of his demise. And what does pimping classic cars have to do with history, proper history? The same goes for restoring 30 year old Coca Cola vending machines. History, according to the narrow view of the producers, is less than 100 years old.

No matter how many times the so-called experts, all three of them, tell us that aliens are real and actually built everything we thought humans built – because apparently we, as humans are incapable – it’s difficult to take it seriously. Isn’t it?

I mean, they could be aliens themselves, trying to convince us that they’re real and come in peace. They used to have special communities for this type of people where they could live in a protected environment, nowadays everybody has a platform. 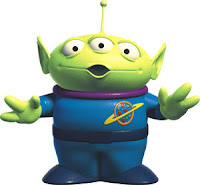 As someone with an avid interest in most things to do with space, the stars, science fiction and conspiracy theories, I can relate to some of these theories to a certain extent. One of the theories that continues to grab my imagination is the one of the faked moon landing. While I do believe without a doubt that we’ve been to the moon and back, I don’t think it happened at that exact moment in space and time. I believe in the moon landing just as much as I believe that governments will try to fool us, for the better of mankind (money, fear, power). I believe that the government would do anything for power, and that they would have done anything to make good on their promise to land on the moon in the 1960s – or to at least make you believe that they did. Just like the little green men who crashed in Roswell were a way to cause a panic and distract us from other more important issues. Flying saucers, really? I’ve never seen a flying saucer in Battlestar Galactica or Star Wars. Even Dr. Who travels by police box. I mean, really.

Meanwhile Mars is the only planet inhabited by alien life, as far as we know. The invasion began in 1971 and the planet is littered with the debris left by failed landings, as well as several miles of tire tracks. For a Martian there’s nothing more annoying than having a fridge-sized object landing in your garden.

Gods forbid Mars is to be our Kobol (look it up); there goes the planet.

I see a football hit a wall, but the sound comes a split-second later. I’m hearing the noise of something that’s happened in the past. Imagine looking up on a clear night and seeing millions of stars, realizing you’re actually looking at the lights of events that are ancient history. I just can’t get my head around it. I can’t stop looking.

My smartphone vibrates with a message telling me the International Space Station is ‘passing by’ in a few minutes. In the darkness of space I see a little white light moving between the stars and I think of Colonel Chris Hadfield, floating through the ISS while paying homage to David Bowie.

No matter how strong the urge to expand our universe, it’s not going to make our world any bigger. We can make plans to colonize other planets; given our history of colonization, it won’t exactly be good news for the multiverses around us.

The further you look beyond known borders, the more valuable the things close to you get.

So say we all.